Concerts were never a huge deal to me when I was a kid. I went to a few and enjoyed them. But they were a very different experience. I went to several Carmen concerts when I was young, they were always free. I was only allowed to listen to Christian music as a kid and so concerts weren’t as big a thing and the artists that really pushed concerts we weren’t really allowed to listen to and certainly wouldn’t have been able to go to a concert. In highschool I went to my first big concert called Winter Jam which had a lot of different Christian artists. Once I got to college and started listening to what I wanted to, I became more interested in potentially going to more concerts. I wish I had actually tried to go to more concerts before I started having my anxiety issues. In a past post I talked about my trip to Disney World. That trip was my first big realization that my anxiety was getting worse. 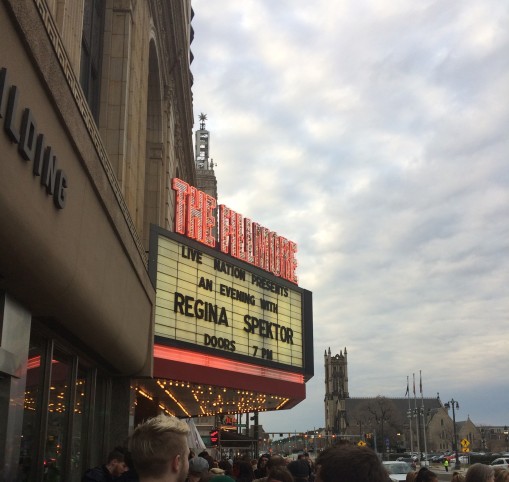 This week I went to my first concert in a few years and while my experience was nothing like the Disney trip it definitely affected me. I went with my sister and one of our friends. We saw Regina Spektor. It was an absolutely amazing concert and I’m so glad I went but it was definitely a struggle. Thankfully we were early and we got a decent spot, we didn’t have actual seats, it was standing room. It started off okay but it got crowded pretty quick. We were standing right behind a rail on the second rise, so thankfully we weren’t in the mass of people. For the first half of the concert I was fine, I was really into the music and Regina Spektor was just amazing and so adorable. However at one point more people had started to move to the main floor in front of us and to the side. At one point it felt like my sister who was to the right of me, was suddenly getting closer and closer. The stranger that was to the left of me also felt like they were suddenly encroaching on my space. There were several moments were I almost elbowed my sister without thinking because I was getting so anxious.

There was a moment were I felt sick to my stomach and wanted nothing more than to rush to the bathroom. I think one of the reasons I managed to  make it through was because of her music, it had a calming affect on me and I really was enjoying myself. Despite that I couldn’t help but look forward to when the concert would be over so I could leave. So when they cheered for an encore I cheered along but every minute that passed I hoped that there wouldn’t be one. There was an encore and it was amazing but I was still glad when it ended. Thankfully we waited until the majority of the people had left which gave me a chance to get some “air”. I have noticed that my anxiety seems to be worse when I’m surrounded by a lot of people and I’m moving, which was one of the problems I had at Disney World.

As I’ve gotten older I’ve realized that I’ve always struggled with this but for some reason it gets worse as I get older. Even though I am no longer shy around people, I am now nervous around large groups of new people. While I no longer obsess over what others think of me, I now become anxious and self conscious being around a lot of people even those I know. I use to be, uneasy around people but it’s like now it stems from somewhere else than it used to and its definitely worse. I don’t enjoy being this way. It doesn’t really affect one on one time with close friends at least not in most situations. However it has in a few small ways. For example I began to withdraw from other close friends, while there were many reasons for my withdrawal, a big reason was because they started hanging out with other people and I felt the only way to spend time with them was to hang out with those other people and that always heightened my anxiety.

Some days I wonder how I ever made it through college, although some of the breakdowns I had make more sense now. Thankfully I haven’t really had any like that in awhile. The more I stress myself out the worse my anxiety gets which is why it was so bad senior year. I was working three jobs with a full load of classes, plus a lot of personal stuff going on. This worries me for the upcoming months. Soon I will be starting my summer job and my plan was to keep my other two jobs which will require a lot of maneuvering and leave me with no freetime. I’m not sure how I’ll handle it. If you have any stress relieving tips, they’d be much appreciated.

An Introverted soul with a love for the extraordinary and ordinary. I have big dreams of publishing my own book or maybe one day opening a bakery/restaurant. My life however is constantly changing and just when I think I've figured things out, I get thrown a curve ball. I love writing, which is why I started this blog. I also love to engage in conversations with people about the things I love. So be prepared for a wide assortment of crazy :) View All Posts

Keepin’ Up With Krispy